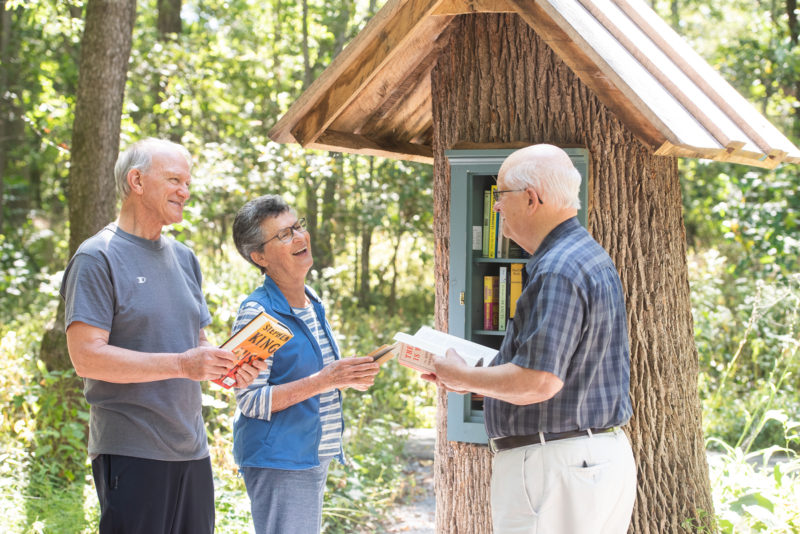 Landis Communities is grateful for our many donors who give monetary and in-kind donations, volunteer time, planned legacy gifts, and bequests in wills. Because of your generosity, aging adults in need today and in the future will benefit from the services Landis Communities provides. Thanks to you, benevolent care, thrive-at-home services, and affordable housing are available to older adults no matter their financial circumstances.

As we serve one another with time, talent and treasure, we create compassionate communities for all. Thank you for giving! You are improving the lives of those served throughout Landis communities.

Keeping residents and clients healthy across Landis Communities has increased expenses and decreased revenue far beyond what we projected. The ongoing battle to keep the virus out of Landis Communities resulted in a serious budget shortfall. Our fiscal year comes to an end on June 30. Will you please help erase the shortfall?

Including Landis Communities in your legacy plan as a beneficiary of your will is a wonderful way to ensure older adults can age in place. Contact Amy Henriques, Director of Advancement, to discuss giving opportunities at 717.381.3584 or email ahenriques@landis.org.

“When Henry was diagnosed with dementia, we began using Landis Adult Day Services two days a week. Adult Day Services gave Henry a safe place to go and gave me time to run errands, schedule appointments, and rest when I needed it. As his abilities declined, he had problems walking and had to go to rehab for three months. While there, I would visit him twice a day. Because he always wanted to come home and I was lonely at home without him, I contacted Landis at Home [for services] to allow us to stay together at home. Without Landis Adult Day Services, and then Landis at Home, I don’t know what we would have done.”

Without generous gifts from donors like you, couples like Rita and Henry might have to make the hard choice to leave home or live separately. And for someone like Henry, who has dementia, moving could be detrimental to his health.

Here is the story of one special resident who benefitted from the Caring Fund. Her name was Esther Kilgore. Esther & John Kilgore lived in Strasburg for many years. Reformed Mennonites, they participated in church activities, raised four boys, worked hard, and lived frugally. They grew and canned their own food, and Esther sewed all her own clothing. After moving to Landis Homes, and John’s death in 2007, Esther continued to live independently.

“Mom’s health began changing and she started wandering which culminated in a diagnosis of dementia. After several moves on campus, she settled in Lancaster House,” one of her sons, Ray Kilgore, said. In December 2018, Esther ran out of personal funds and began receiving assistance from the Caring Fund until she passed away in July 2020.

“She would have turned 99 years old in August. We are so thankful for the care she received even after running out of funds. If you can give to the Caring Fund, it’s worthwhile to do it,” Ray said.

“One of the most important things about Landis at Home is that we don’t just drop clients off at the front door and leave. We stay with them. It is more than transportation; it is walking alongside.”